Gion Festival is going to be held!
It’s Kyoto’s most exciting, hottest days.(Until 7/17)

Gion Festival is going to be held!It’s Kyoto’s most exciting, hottest days.(Until 7/17)

“Gion-Matsuri(Festival)” is Kyoto’s one of biggest festival since 9th century.

Old Kyoto people started praying for no disease after an epidemic of plague, it was told it is the start of Gion-Matsuri.

This festival belongs to Yasaka-Shrine, but the main part of the festival is carrying portable shrines around Kyoto town.

Those portable shrines are called “Hoko” or “Yama” and its decoration is based on famous Japanese and Chinese story.

Each Hoko and Yama are decorated by various traditional artifacts and keep their own “Go-shintai”(means object of worship) inside.

Most of them were burned or destroid in the past domestic wars, but Kyoto people repair and rebuild them time after time, and Gion festival is still going on now a days…

And, There is one Yama base infront of our shop, and its famous for talisman for a happy marriage!

All men and Women who is looking for love must check it out! 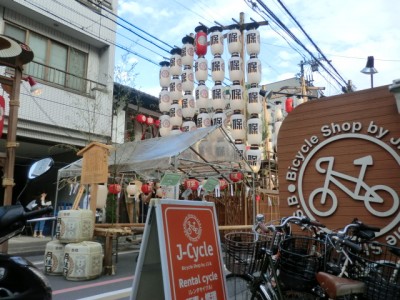 This float depicts the story of Fujiwara Yasumasa (Hosho is another way to read his name in Japanese), an 11th century Japanese warrior.

He loved a court lady, who entreated him to get some plum blossoms, which were blooming at the Imperial palace.

This float is, therefore, worshiped as the God of love, and on the festival eve, people can get a special talisman for a happy marriage in front of this float.

【discription for Another famous “Yama”,”Hoko”】

this one is always going first of the “Yama”,”Hoko” marching.

And Its only one Hoko it keeps holy child (through some pre ritual in Yasaka shrine, this child become messenger of Shinto-God.) inside.

And it is holding holy katana blade on top of it which is believed it expels evil and desease.

Special Goods(Selling in front of the base):

Hand towel・Toy katana blade （as a talisman for good health）

Tourou(Mantis)-Yama is famous for its gimmick of big mantis on the portable shrine.

Special Goods(Selling in front of the base):